At approximately .75 miles roundtrip this is a nice easy, and not very steep, hike. About half way to the 5,690 foot summit the trail splits into a loop that follows around the outside of the peak. I decide to go left, giving me views of Terry Peak and the Harney Peak range to the south.

As I reach the summit the castle rook monument known as Friendship Tower comes into view. This 32 foot tall tower was built in 1919 by the first sheriff of Deadwood, Seth Bullock, as a tribute to his close friend, President Theodore Roosevelt. The tower is the nation’s first memorial to the president who played an important role to many conservation projects that exist in the Black Hills today, including Wind Cave National Park and Devils Tower National Monument. 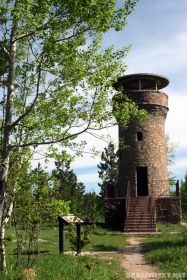 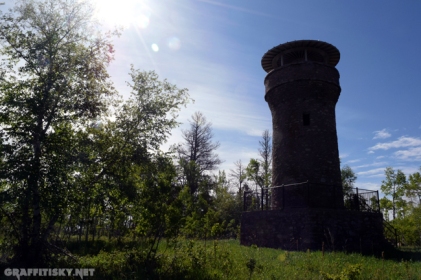 In 2010 they began restoration of the tower to allow public access. Improvements include building additional stairs and handrails to make climbing the tower much easier. The spiral staircase inside is very steep and narrow so I was thankful for that handrail. At the top the 360 degree views includes Bear Butte, Bear Lodge Mountains, Terry Peak, Custer Peak, and the Harney Peak Range. On a clear day you can see as far as North Dakota and Wyoming.