This weekend was the second annual Burning Beetle festival in Custer, South Dakota, a celebration in dishonor of the ravenous mountain pine beetle, complete with the burning of a 28-foot wooden beetle ala Burning Man.

But what is a mountain pine beetle, and why is it so destructive?

The mountain pine beetle is a species of bark beetle native to the forests of western North America from Mexico to central British Columbia. An adult beetle measures in at about 1/4 of an inch, about the size of a grain of rice. They fly from infested trees to new host trees in late June or July. The adults then tunnel beneath the tree’s bark to lay eggs. The larvae feed from within the tree until the following spring, when they pupate and emerge as adults, starting the cycle all over again.

The tunneling beneath the bark by the adult beetles and their larvae harms the tree, disrupting movement of food, produced by the needles, to the roots. The adult beetles can also carry a blue-stain fungus from tree to tree, which stops the movement of water from the roots to the needles. These two factors cause the trees to die.

pitch tubes on an infested tree

This insect, as with many other insects, goes through cycles where they become very abundant and then relatively rare. Normally these insects play an important role in the life of a forest, attacking old or weakened trees, and speeding development of a younger forest. Every ten years or so the beetle population increases, and the beetles colonize and kill healthy trees as well.

The first recorded outbreak in the Black Hills occurred in the late 1890s. An estimated 10 million trees were killed during this outbreak. Several outbreaks have occurred since that time, though none have reached the same magnitude. The last time an outbreak occurred was from 1988 to 1992, and resulted in the death of around 50,000 trees.

These outbreaks typically last for about 5 to 13 years, after which the beetle population once again declines. However, unusual hot, dry summers and mild winters throughout the region during the last few years have led to what may be the largest forest insect blight ever seen in North America.

Mountain pine beetles thrive in high density tree stands. Therefore, the best prevention against their spread is by thinning the forest. Thinning is the removal of smaller trees, poorly formed trees, and those already infested with insects, leaving more growing space for the larger and healthier trees. The thinned forest is also favorable for grass and shrub growth, and improves the habitat for many wildlife species.

In addition to traditional methods, pheromones, a synthetic form of attractants naturally produced by beetles, can be used to draw beetles to specific trees. Baited trees draw many times the normal number of beetles, essentially “soaking up” a population. Infested trees are felled, cut into 2-foot lengths, and left to dry out. The drying wood does not provide enough food, thus killing the developing beetle larvae. 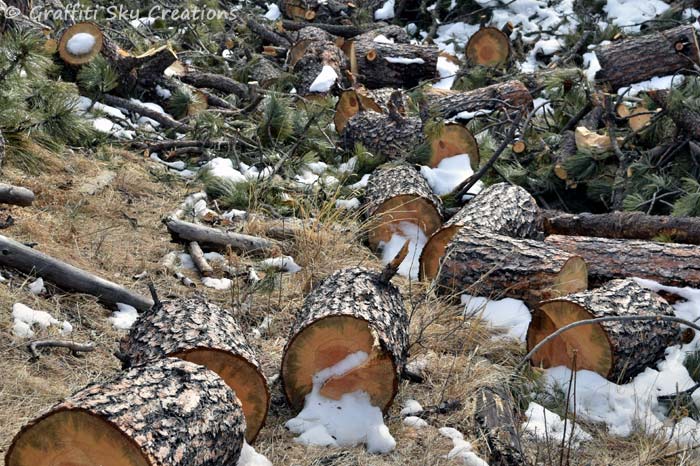 These treatments have been very effective in reducing the rate of spread. The beetle is also contributing to its own demise as it devours its food source, and predatory insects and fungi are slowly beginning to attack and reduce beetle populations. As the older trees die and fall, the little young trees start to grow in thick. And thus the cycle of the forest continues on.